First Aid trained personnel at the workplace is a requirement of Health & Safety law. First Aiders can act to prevent situations becoming worse and can reduce potential sick leave through prompt emergency action. They will be able to use provided First Aid equipment and an AED (Automatic External Defibrillator) with confidence.

From the Resuscitation Council (UK). 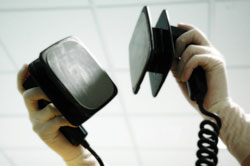 Electrical defibrillation is well established as the only effective therapy for cardiac arrest due to ventricular fibrillation (VF) or pulseless ventricular tachycardia (VT). The scientific evidence to support early defibrillation is overwhelming, the single most important determinant of survival being the delay from collapse to delivery of the first shock. The chances of successful defibrillation decline at a rate of 7 - 10% with each minute; basic life support will help to sustain a shockable rhythm but is not a definitive treatment.

The 'chain of survival' concept

The chances of survival following cardiac arrest are considerably improved if appropriate steps are taken to deal with the emergency. These steps are:

Manual defibrillation has been widely available for many years, but the requirement for training in arrhythmia recognition limits the application of this technique to medical practitioners, nurses working in critical care areas and ambulance paramedics.

Increased provision of early defibrillation through the widespread deployment of AEDs is now considered a realistic strategy for reducing mortality from cardiac arrest due to ischaemic heart disease. The following recommendations are intended to provide guidance to those responsible for the provision of cardiopulmonary resuscitation in various settings.

Automated external defibrillators must be totally reliable, simple to operate, of low weight, require little routine maintenance and be competitively priced. Recording facilities are considered essential to facilitate evaluation and audit. Standardisation of consumables (electrode pads etc.), connecting cables, control switches and testing procedures is strongly recommended. There is no consensus on standards for battery capacity at present. Equipment should be configurable to facilitate upgrading as new guidelines and treatment algorithms are developed.

Monophasic defibrillators should deliver energy in accordance with current advanced life support algorithms (200, 200, 360 joules). Some newer devices deliver lower energy shocks using biphasic waveforms. These are currently undergoing evaluation, and the results to date would support their use.

Because it is occasionally necessary to cut through clothing and/or shave a victim's chest to facilitate electrode placement, it is recommended that AEDs are provided with a sturdy carrying pouch, which should contain spare electrodes, strong scissors and a disposable safety razor, as well as spare electrodes.

AEDs have been used successfully in the community by lay first responders, including police officers, fire-fighters, security staff, airline cabin crew and members of first aid and rescue organisations. The Resuscitation Council (UK) recommends that AEDs be made available wherever large crowds gather, for example at sports stadiums, pop concerts, theatres, cinemas and shopping complexes. The Council strongly recommends that organisations contemplating deployment of AEDs should seek the advice of a recognised training organisation, for example a statutory ambulance service, a voluntary aid society or equivalent body.

3A. If signs of a circulation ARE present:

3B. If NO signs of a circulation:

Start BLS if defibrillator is not immediately available

Ensure that nobody touches the victim whilst the AED is analysing the rhythm.

4A. If a shock IS indicated:

Do not perform pulse checks between the first three shocks

After three shocks check for signs of a circulation:
(i) If NO circulation present:

(ii) If signs of a circulation ARE present:

4B. If NO shock indicated:

There should be no voice prompts during this time. CPR will be timed by the AED timer - this will usually be four cycles of one-rescuer CPR

5. Continue to follow AED instructions until ALS is available.

NOTE:
This algorithm is intended to be used flexibly. Whether BLS is initiated, and the stage at which the AED electrode pads are attached, will depend upon the circumstances of the arrest and the training of the responder. For example, a lay first responder should normally follow the BLS sequence to the point at which it is determined that there are no signs of a circulation; the AED pads should then be attached. On the other hand, an ambulance paramedic may well be following a protocol that requires the electrodes to be applied to any non-breathing victim before other checks are carried out.

AEDs may be used in children of eight years and older (over approximately 25kg) although experience is currently limited.

AEDs can accurately detect VF in all ages but may be inaccurate in the detection of tachyarrhythmias in infants.

AEDs cannot be recommended for use in children under the age of eight years. Facilities that care for children under this age must provide defibrillators capable of appropriate energy adjustment.